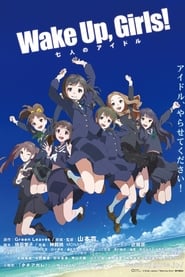 The era is the Idol Warring Era. This is the origin story of the the seven girls known as the "Wake Up, Girls," and the hardships they face. A rather insignificant talent agency called Green Leaves Entertainment that's located in Sendai, Japan, is about to go under. At one point, they represented magicians, gravure idols, and fortune tellers, but finally, their one remaining talent finally quits. Faced with having absolutely no one to represent, the agency president, Tange, thinks up a plan to produce an idol group.